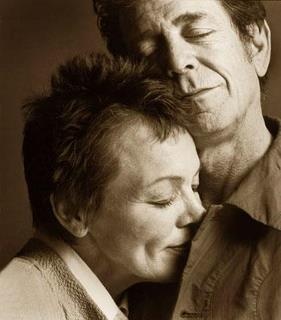 As I was building my Clutch Bags business I first experienced Lou Reed on a very personal level, as you do most memorable momentsÂ  in NYC, when I least expected to.Â  It was about 10 years ago, and I was shooting in a photographer’s studio in Soho, when in walked this guy wearing a leather jacket to say hello to his good friend, the photographer I happen to be working with that day.Â  It was 3 o’clock in the afternoon and we were all a little groggy from lunch.Â  The experience was all so casual, that it felt too real.Â  That is what it is like to meet anyone in NYC who is classified as a celebrity.Â  The experience becomes so intimate with the person that the “grandiosity” that could ever stand a chance of existing just fades away.Â  This is a delightful experience, by the way.

The second time I experienced Lou Reed, he was with the love of his life, Laurie Anderson.Â  Again, it was a very intimate setting, only more intimate and personal for them.Â  I remember I had arrived at our neighborhood gym, where they were members, and I was waiting for the elevator that overlooked the gym floor, which was very open and available to the public eye.Â  If I recall correctly, it was a Sunday, late in the afternoon.Â  The gym floor was completely empty, save for the two bodies which lay parallel to one another in corpse pose on yoga mats, barely a hair between them.Â  Their eyes were closed as their bodies breathed in perfect unison, their palms lay open to the ceiling and their legs lay splayed apart.Â  They existed as if no one existed around them. Peace was written across their faces.Â  It was Lou Reed and Laurie Anderson, enjoying some moments of a very relaxedÂ  meditationÂ  at their neighborhood gym.Â  It was, for me,Â  an intimate look at two amazing artists living in real time.Â  Wow.

The third time I experienced Lou and Laurie was at the Sunshine Theatre in NYC.Â  I had grabbed a friend to join me for a French film about a man who was dying and had invitedÂ  his family to be with him during his remaining weeks.Â  As the film began and we located some seats in the front row, I was asked to move down by a woman with a man in tow.Â  I recognized the couple as the bright light of the movie shone on the faces of the audience and a snore came out of the man’s nostrils.Â  Behold, it was Laurie Anderson with a slight smile on her face and Lou Reed, who was taking a snooze.Â  Yet, another classic NYC moment that only fate and unwitting timing can capture.

When I heard the news of Lou Reed’s passing today, I thought of Laurie Anderson.Â  The image of the two of them together on the gym floor, peaceful, happy, content, immediately popped into my mind. Â  I thought of his departure today from this earth and imaginedÂ  it was just the two of them, during his final moments, together, saying good-bye.Â  I thought of how Lou must look, as I had seen him that Sunday afternoon, splayed out on the gym floor and knew, as a neighbor would, that Lou knew what peace was and had found it.

With Peace and Remembrance~

And love to Laurie,